The Classic begins as ever several months prior to the date of the competition.

The details are advertised on the internet in September of the previous year. The date of the competition is always the first Saturday in July. However due to an error by Hillcrest Bowling Club who had already posted their finals night on the 7th July. Due to complications for Hillcrest I decided to change the Cleckheaton date to Saturday 30th June. This did mean that there were clashes with other competitions but that was not too much of a concern as the way the competition is now run it is less dependent on non- bowler spectators to generate a successful day and a profit.

The day of the competition went very smoothly and it was won by Michael Leach from Preston who is over 70 years old. Congratulations to him for winning six rounds on what was a very hot day.

The one-day format of the competition once again pried popular. The competition date will revert back to the first Saturday (6th) in July 2019.

The recent previous running of the Classic over first nine and later five weeks relied heavily on a good attendance by supporters each of the weeks to enable the competition to be successful. It was decided to streamline the competition by running the Classic on one day with 64 players taking part.

With free entry for everyone all day, starting and finishing earlier made it more attractive for the bowlers and spectators. The greens were in good condition but the organisation of the competition on the day was more challenging due to the use of two greens with players alternating between greens. The day ran smoothly largely due to good communication between members using two way radios. Food and drink was also provided from the early start of 10:30am until the 8:30pm finish.

To celebrate the opening of the new pavilion on the bottom green the semi- finals and final were held on the bottom green. After speaking with a number of spectators and bowlers they agreed that the ambience on the back green was good. The managing and structure of the competition will need tweaking slightly for any future running of the competition but all in all the day was regarded as successful by members, bowlers and spectators. Well done to Calum Wraight and Ian Booth for a cracking final and well done Ian on winning and gaining a place in the Champion of Champions at Waterloo, Blackpool later in the year.

Semis and Final played on the top green.

The Classic prize was reduced by a few hundred pounds to £5425. The changes were made to try and encourage the normal club to enter the competition. Entrants had only to win two qualifying games to claim £75. The entry fee was maintained at £25. Despite the reduction in prize money the 128 places in the competition were filled within a few weeks of advertisement on the internet.

The weather for the qualifying rounds was reasonable but despite this the number of spectators was less than previous years and this is reflected by a reported general decline from other local competition organisers. Fewer spectators means less chance to recover prize money through raffles and catering. There were also fewer people to watch the final days bowling. Nevertheless the competition made a profit of over £300.

The final day sixteen bowlers consisted of ten Yorkshireman. However the winner was once again Gary Ellis from Whitefield near Manchester and this was his fifth victory in this competition.

At a subsequent bowling meeting, due to poor support from the public, an issue of lack of help from members and low competition profit compared to amount of work involved it was decided not to run the Classic in the same format in 2017.

The entries for the 2015 Cleckheaton Sports Classic were opened as usual in September 2014 seven months before the qualifying round. Entries did not come in as quickly as previous years but eventually the maximum 128 bowlers was achieved in late April with a robust reserve list in the following few weeks.

For the second successive year the competition qualifying rounds were bowled on each Friday and Saturday evening in June. It was noticeable that the number of spectators is reducing year by year, especially on Friday nights. Having spoken to other competition organisers they are also seeing less people in attendance. This reduction in spectators means less opportunity to make money through catering and raffles.

The weather was reasonably kind as most of the time it was dry although rather cool. Despite this issue the bowling green was in very good condition throughout the competition and many good comments were received from the bowlers. This is a testament to the hard work of John and Keith.

Strong fields of top bowlers each night led to some excellent matches and this resulted in a top quality final sixteen. There were a number of past winners in the final but the eventual winner, Chris Kelly from South Yorkshire put his name on the trophy and gained entry into the Champion of Champions.

Chris Brown won his second competition of the day after defeating Tommy Johnstone in a close final at Cleckheaton.

Great weather and a good crowd witnessed some superb bowling by everyone but the best was saved for the final, when some very close bowling by both Gary Ellis and Paul Dudley, resulted in a lead of 20-15 for Paul but a wonder wood by Gary at the next end got him the jack and he ran out to win 21-20

Follow this link to see our photo gallery of what was a great day. 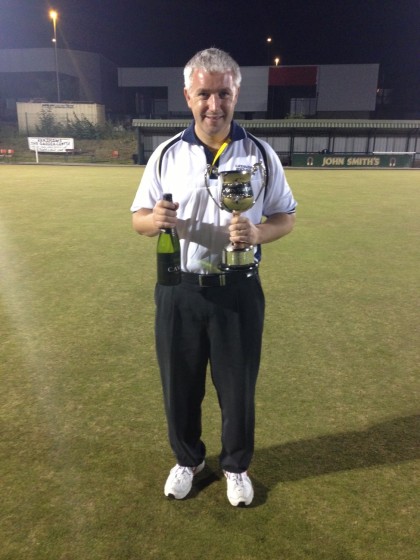